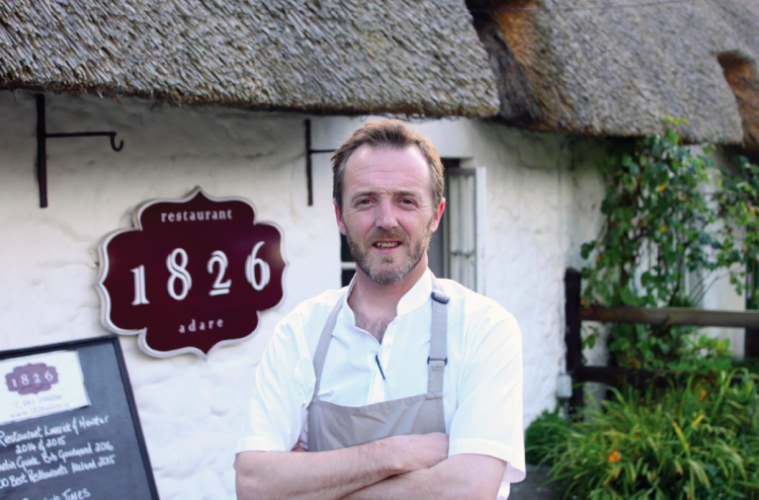 In conversation with: Chef Wade Murphy

Wade Murphy is obviously a man who likes to keep busy. Chef and co-owner, along with wife Elaine, of 1826 Adare, the Limerick restaurant awarded a Bib Gourmand this year by the Michelin Guide and also RAI Best Restaurant in Munster, he is current Commissioner General of Euro-toques Ireland, the national organisation of outstanding chefs established by Myrtle Allen.

From guesting at Electric Picnic’s Theatre of Food and Irish food symposium ‘Food on the Edge’, Wade is a daytime TV regular on RTE’s Today programme but found time in his hectic schedule for a coffee and a chat during afternoon prep time in the restaurant.

Tell me about your philosophy

When we opened we were going for a very simple restaurant but people’s expectations and people’s knowledge now are a lot greater than what they used to be. Irish people are a lot more travelled, they have much greater and wider palettes. People are not expecting dinner any more, they’re expecting an experience.

Our philosophy has developed but it’s a continuation of what I always believed, even when I moved to America, I would go to green city markets for example. While you learn in the States a lot about plating and they have very good ideas, the bare produce that you get coming through your door is nowhere near [as good as] ours, and so after two years plus there I didn’t want to cook that anymore.

I’m very anti genetically modified foods, or any messing with the natural ingredients. At the end of the day there are only so many candy stripe carrots that have been genetically grown that you can cook and prep without getting fed up.

Are we spoiled here in that case?

Absolutely. I know we keep harping on about it and blowing our own trumpet but a lot of our produce is some of the best in the world.

Did you find it hard to source local producers?

As soon as we opened people came knocking. The guy from Bally Salads called in with a sample, Garrett of Garrett’s Butchers in Limerick came out to me and said ‘call into the shop and I’ll show you more’. Whenever somebody does come in and gives me some of their product I’ll make sure I go to where they are and see it. And then we try to treat their ingredients with the respect they deserve.

Are we doing enough to promote Irish food?

We need to have a food culture and all us chefs are responsible, we all need to support one another. Whether I like what somebody else is cooking or whether I believe in their ethos, it’s their ethos, fair play to them, back them. We need to be singing from the rafters about Irish food and while we’re very good at running each other down, we’re also very good at patting each other on the back when we don’t necessarily deserve it because we’re not there yet. We still have a lot to do. Our food heritage is phenomenal, our food culture, our food family is phenomenal. Let’s look at that and let’s promote that more.

Is the education for chefs good enough?

I can see it changing and we’re talking a lot more about the seasons. The buzz words seasonal, artisan, locally produced etc are getting over used now, but if it means we’re starting to act on it then I’m all for it. Use it but back it up as well. Just before the start of every month I write a list of what vegetables are in season and we start changing dishes and specials.

How do you feel about calories on menus?

I’ll pay the fine, I won’t do it, I refuse to do it. The fight against obesity is all well and good but stop hitting people like us because we’re not the cause of obesity.

As far as I’m concerned service levels have grown in this country. You have service legends the likes of Dan Mullane out the road here [in the Mustard Seed] an absolute legend and a gent, and good friend of the restaurant too.

What do you think of Limerick’s food culture and the scene here?

It’s good but it could be better. There’s great produce around here and some serious talent. It needs to be promoted better and it needs to be supported better.

And what about the selection of restaurants, are we missing a fine dining restaurant in the city?

I think people are moving away from fine dining more and more, away from pompous silver service. Casual restaurants with good food are really what people want now. Limerick has some good places like Aroi and La Cucina but could do with more. You wonder is the lack of fine dining options because they don’t work in the city and it’s not really what the people want.

You can talk about the restaurant scene and fine dining and all that but at the end of the day there’s nothing better than something simple at home like pot roast chicken. To me, the heart of a home is around a kitchen table.

(This article also appeared in The Limerick Magazine)