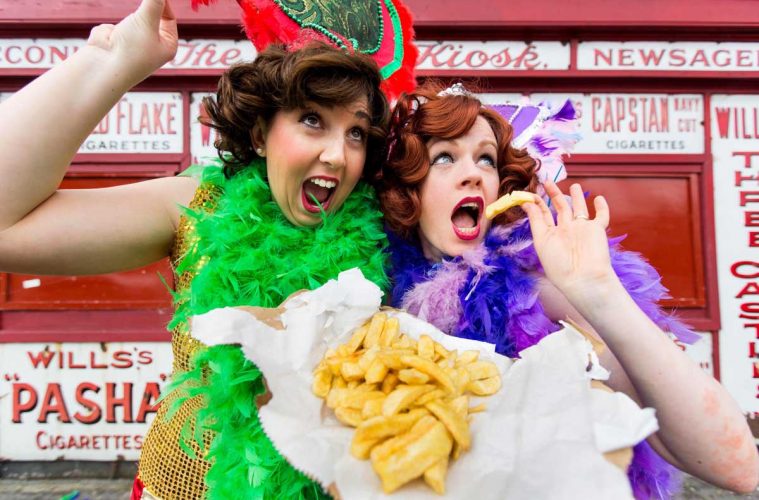 Roll up, roll up… Limerick City is celebrating the legacy of its year of culture last year by welcoming back one of its most successful weekends as the Spiegeltent returns to Arthur’s Quay Park for Culture & Chips 2015 over the June Bank Holiday weekend.

‘Culture & Chips’ is a food carnival with a difference, taking place in the city centre, in an authentic specially transported 1920’s Spiegeltent. Last year’s line-up featured music, food, comedy, children’s theatre and percussion, and lively discussion, and this year’s crop will see that and more, culminating in the return of the World Chip Championships to find the best-tasting chip on the planet.

Mick Flannery, Eddi Reader (of Fairground Attraction fame), and Hermitage Green are just some of the musical acts bringing their live shows to the wonderous Spiegeltent, as well as ‘Printer Clips’ the side project of Bell X1 front man Paul Noonan accompanied by multi award-winning artist Gemma Hayes.

Cabaret des Frites will return for ‘pommes in the park’ part deux, and is expected to be an even faster sell-out this year after last year’s overwhelming success. The delectable Culinary Carnival Chip Banquet is back too using locally sourced produce from the region with matching wines and craft beers. Feeling chipper yet?

The World Chip Championships will be held for the second time ever, anywhere, as Limerick searches for a chef or cook worthy to take the title from last year’s inaugural winner, Lema Murphy, with her entry inspired by the Irish TV cult classic entitled ‘Sunday night treat before Glenroe’, a dish featuring triple cooked chips with baked bean and bacon sauce with deep fried egg yoke. This will be an open contest to all cooks with a passion for the frite, each hoping to cut the mustard and take home that French-fried title!

Free family fun in the form of Spiegelkidz Rhythm, Music Generation, and a Circus Skills Workshop means there is something on offer for all the family over the weekend. And Clown Noir’s 60-minute voyage of discovery, comedy and heartbreak will tick the box nicely for older teens.

Adding to the flavour of the Spiegeltent over the June Bank Holiday weekend, tasty vendors will once again surround the camp with offerings of chips (and more chips) to ice-cream, BBQ, coffees, delicious cakes, artisan cheese and more.

With the Barbarians v Ireland rugby match in Thomond Park on Thursday, and Irish Chamber Orchestra presenting A Viennese Prom in the Milk Market on Thursday and Friday, it’s an action-packed time in Limerick City. The TomCat Street Festival also takes place on the streets and in the hostelries of Thomas Street and Catherine Street throughout the weekend so visitors can sample some TomCat creativity too. Not to mention the Foynes Irish Coffee Festival just 40mins out the N69 the same weekend.

Lots of reasons to be in Limerick this June Bank Holiday weekend from May 28th to June 2nd – get yourself on down. (Note: salt, vinegar and ketchup will be provided. Oh and chips. Lots of chips.)